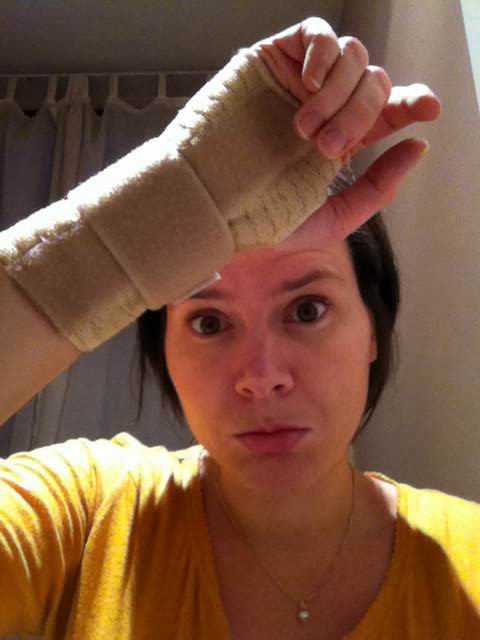 I had had brief and informative encounters with the beast before, but they were always short bouts which would disappear completely after 3-4 days of being a bit more careful with my hands. Not this time. A week after I noticed the first symptoms, the pain was still there, and getting worse. After 10 days of desperation I bought a wrist brace (pictured), which only resulted in moving the pain from my index finger and wrist to the elbow and shoulder. For a few days I didn’t know if it was my mind or my body which had gone mad (with the pain jumping back and forth, seemingly at random, around my arm and hand). And then I finally went to the doctor. The most I could get from him was reassurance that nothing was broken or sprained (I was happy to hear that, at least), and a long-term referral to a physio to learn some preventive exercises.

A few weeks down the line, I am mostly better, though still feeling twinges of discomfort every now and then. But one thing’s for sure – there won’t be any knitting or crocheting for a while, as the idea of that dull incessant pain coming back is still terrifyingly fresh in my mind. When this started happening, one of my crafting buddies (no doubt responding to my incessant complaining – I am not good company when I’m sick or injured) said something along the lines of “Oh poor you, you must be missing knitting so much.” I knew what she meant – I had thought that would be my primary concern as well. But when every movement of my right arm, hand or fingers was painful, I came to fully realise for the first time ever the extent to which I use every each one of them every single minute of the day and what incredibly valuable tools they are. When things like brushing my teeth (with my right hand), cutting bread for a sandwich (with my right hand), opening doors (with my right hand) became difficult, feeling sorry for myself because I couldn’t craft was really the last thing on my mind.

I will say one thing though (in response to another friend’s query) – knitting was not to blame. It was my office job which consists of, well, typing and scrolling, from 9 to 5. Knitting is innocent, I swear! ;)

Take care of your valuable tools, my friends. Hugs!