Old WIPs have been instrumental in my return to knitting (and crocheting). I have a few rather large projects which have been siting in a 70%-finished limbo for quite a while, and it was precisely that feeling of “oh they’re almost done, you just need to go for the home stretch” that made me feel empowered enough to tackle them (yes, empowered – the immensity of projects can be truly intimidating sometimes!). It worked for my beautiful sweater, and now it’s working for another, even bigger project.

In fact, at first glance, this seems like a tiny thing.

But add a lot of tiny things…

…and you get one gigantic, ever-gowing thing.

When it’s finished, this will without a doubt be the biggest project I’ve ever conquered. That remaining pile of circles still looks a bit scary, but I’m so close now that I can almost smell the end! I can’t wait to show you the finished product!

Here I am, sitting with my two favourite books on socks, both informative, educational, detailed, well thought-through. And yet, they are both utterly useless in helping me out of my conundrum. You see, I’m knitting socks for my mum, whose foot size is totally different from any of the feet I have close to me.

And yet, the thorough introductory sections and the 38 patterns included in these two books all say the same: Work even until the foot is approximately xy cm shorter than the desired finished length. Assuming, of course, that you have the foot at hand and can therefore easily slip the sock-in-progress on and check them against your desired finished length. So what if you don’t?

Is there a better answer than the only one that comes to mind now, which is try to eyeball it and keep your fingers crossed until December, when I plan to hand over loads of socks to loads of family members (as a surprise), all with vastly different foot sizes? Is there an obvious thing I’m missing? Or a magical chart somewhere on the internets that will tell me everything I need to know, if only I’d be bothered enough to google for two minutes? Help!

p.s. This is another pair of plain vanilla socks knit from the toe up, in the magnificent
Ancient Threads Sockittome Select, one of my all time favourite sock yarns.

Here they are, the socks that reminded me that knitting socks is easy and that I love it. 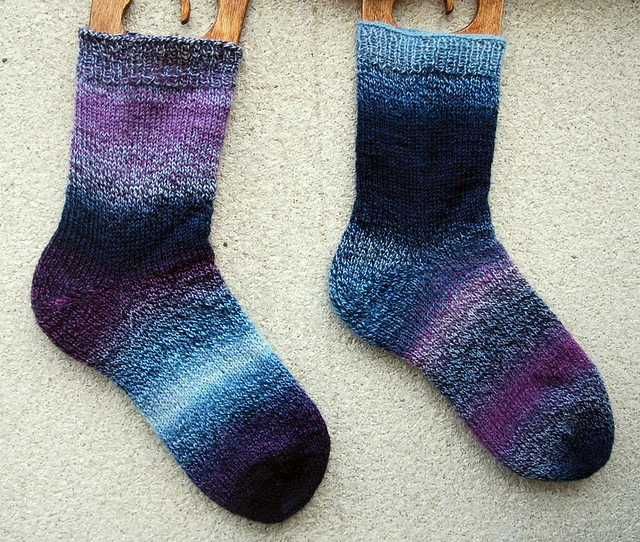 For this first pair, I kept it simple and easy – the so called “plain vanilla” socks: all stockinette, no special features, letting the yarn tell its own story. For these kinds of socks I usually turn to Wendy Johnson’s Socks from the Toe Up book, which helped me make my first steps in sock-knitting and remains a trusted resource. While I have nothing against cuff-down socks, toe-up knitting can be really handy in certain situations, for example when you’re not sure how much yarn you will have exactly. You get the non-negotiable part of the socks (i.e. the length of the foot) knit first, and then for the cuff you can just keep knitting until you run out of yarn.

I really love that Wendy presents a number of different toe and heel techniques, and these kinds of simple socks are perfect for experimenting and finding your preferred option. For these socks I went with the short-row heel, which I think of as “the standard” heel type. The finished heel was fine, but I did find the process rather hard on the fingers (lots of tight wraps to pick up and knit), so it’s not my favourite heel type. 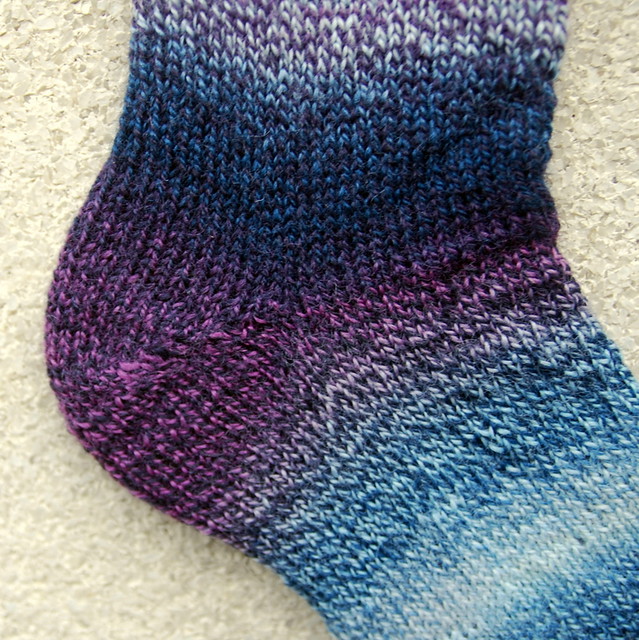 Towards the end of last year, knitting slowly crept back into my life. I was enjoying this resurgence of my old passion, so as I packed my suitcases for a week off at my parents’, I was eager to bring some knitting along as well. What’s easily transportable (my suitcase already bursting at the seams with xmas gifts) and easy to work on (i.e. won’t distract me from participating in all the family chatter going on), I thought? Socks, of course. 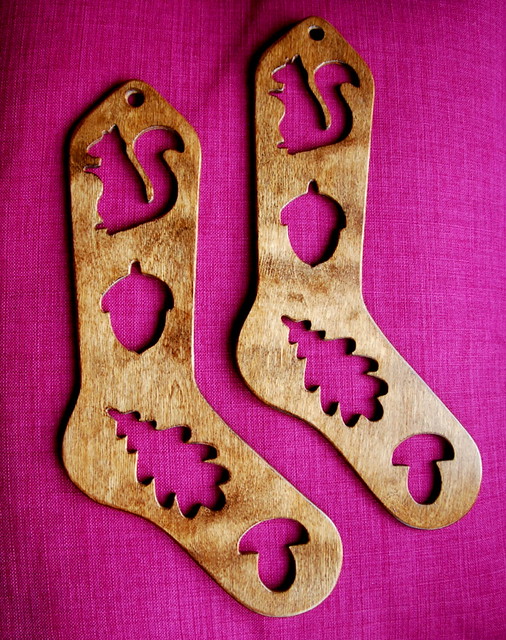 So I pulled out a ball of sock yarn from my stash, checked my trusty reference books, and did the fiddly part of casting on, so that in the midst of the family hubbub I could simply dive in to some mindless knitting. I saw this as a sort of experiment for my hands, which had struggled with RSI for a long time, but seemed to be doing ok lately. If they could handle a week of almost daily knitting on teeny tiny needles, we might be getting somewhere. I approached it cautiously, but enthusiastically. 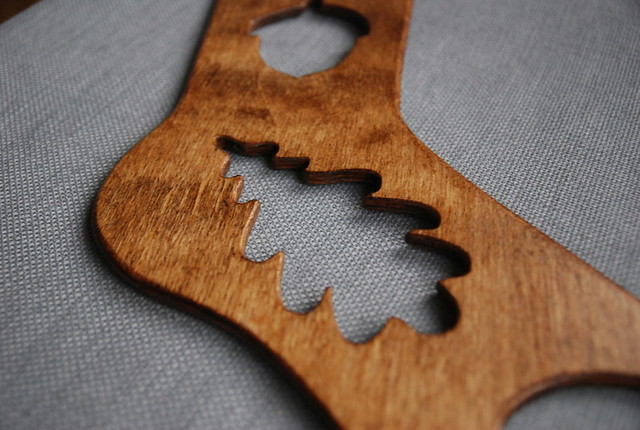 And it worked just fine. Not only did my hands not complain too much, but I also rediscovered that funny thing about socks. You know, that thing about how they seem sooo scary (the fine yarn, the small needles, the complex construction elements), but then you knit one and remember that it’s mostly just knitting a rather small tube of stockinette, with a little shaping in the beginning (toe) and middle (heel). It’s what I love about socks. 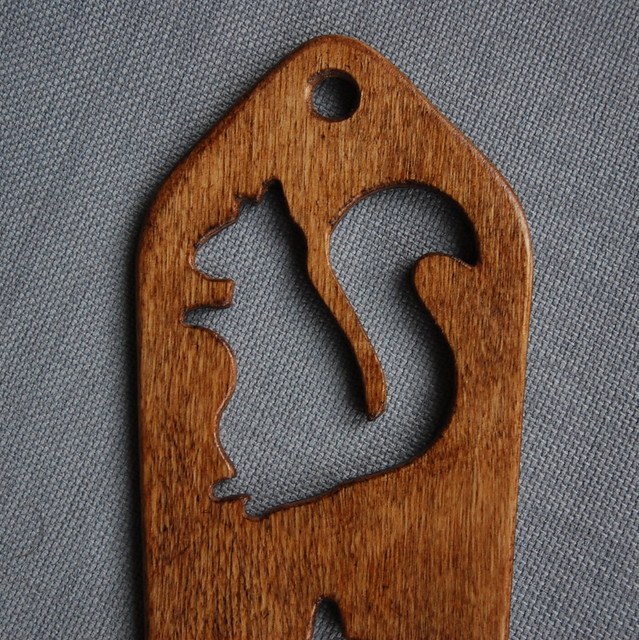 And so, having come back home in the last days of 2016 with two socks almost finished in one week, somehow the decision was already half formed in my mind before I even articulated it. 2017 would be my year of socks. I would work from my stash, experiment with patterns, and see where it got me. Mostly, I would have fun. 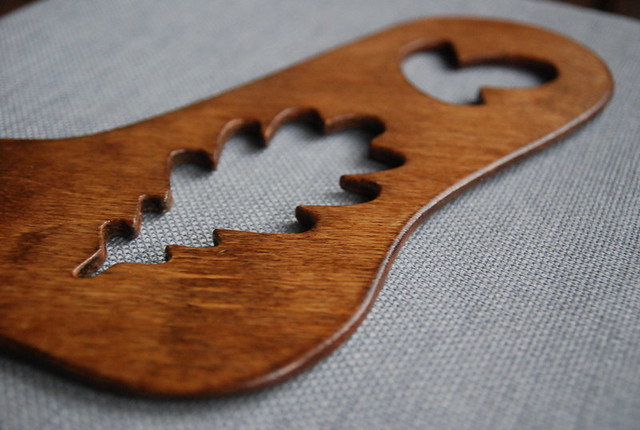 So here we are. Two pairs are already off the needles, and will be making an appearance here soon. But if I was to have a year of socks, well, then surely I deserved a little treat to properly show them off when they were done. And I’m even knitting from stash so I’m not spending any money on yarn. Surely that should be rewarded, I reasoned. A few clicks around Etsy and I ended up with these beauties. I absolutely luuuuurve them and I’ll be putting them to good use this year. 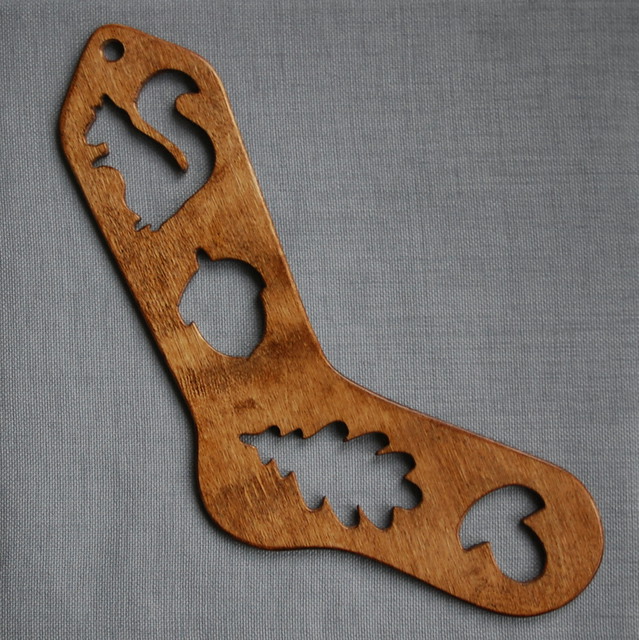