Some projects are exquisitely satisfying. It doesn’t even matter if it is something as simple as a plain hat, the kind of thing that even a total beginner could produce without breaking a sweat, sometimes all these little things come together in a project that make me squeal with joy every time I think of it!

Case in point: the hat a friend of mine asked me to knit for her boyfriend a few weeks ago. When I asked what she had in mind, she said she wanted a “where’s waldo” style hat, in other words: simple, close-fitting, with a pom-pom. She came over to look at my yarn stash, chose the colours, and I was set to go. 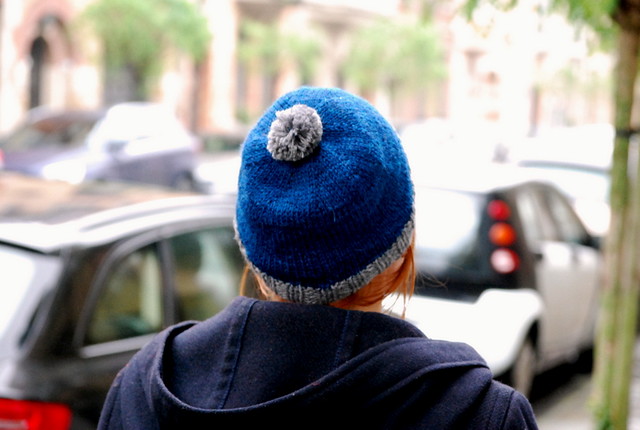 Already the choice of colours had me pleased as punch. When we were standing in front of my collection of worsted weight yarns, we were both drawn to the exact same combination. I tried to show her other options, because I didn’t want to push my preference on her, but it was clear that she was just as in love with it as I was.

Afterwards, as I set off to knit, I had a clear image in my mind of how I wanted this hat to look. But instead of looking for a pattern, I decided to improvise based on another pattern I knew well. I thought that would work to create the result I wanted it, but I wasn’t sure. Aaaaah how satisfying when it did work out! 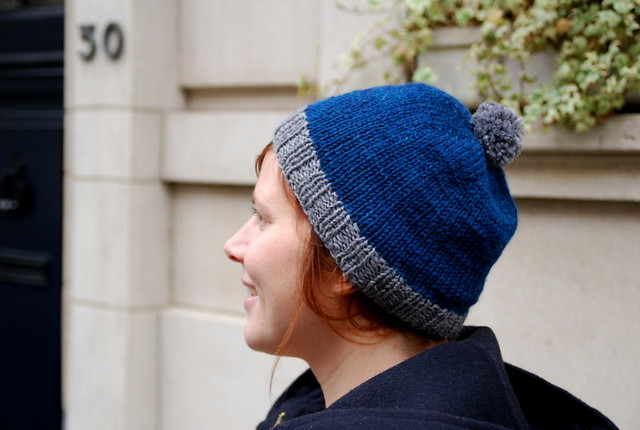 Finally, as I was close to finishing, I started biting my nails, wondering whether I had enough of the contrast colour left to do the ribbing and a pom-pom. I did have some similar yarn in back-up, but it just wouldn’t have been the same. Imagine my satisfaction when it turned out that the amount I had was just right for a nice ribbed band and a pom-pom of the perfect fullness! So not only did I have all I needed to complete the project, but I used up every last bit of my yarn. Perfect destashing! 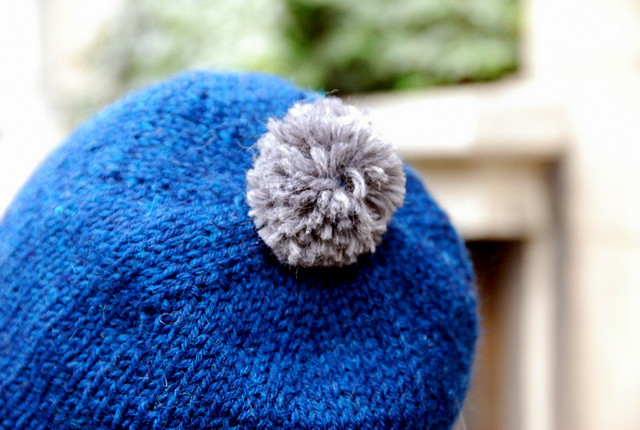 And there you go, a simple project that just tickled all the right spots of my knitting brain. Utter satisfaction. :) 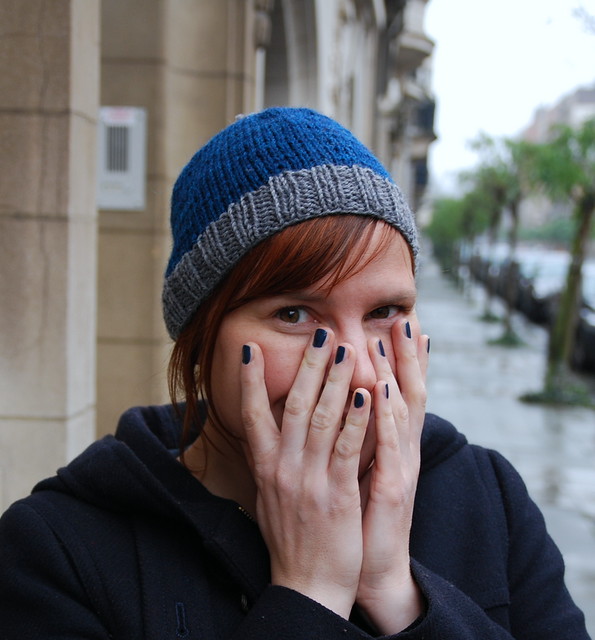 What tickles you when it comes to knitting? What in a project makes you grin to yourself secretly as you knit away? :)

Details on how I made the hat on Ravelry.

Last weekend, I had my favourite visitors over – my niece (13) and nephew (7). These kids… I can’t even begin to write about how much I love them and love spending time with them. I take special pride in them calling me by my name (rather than ‘auntie’), as well as in the fact that they head straight for my room the moment they arrive to my parents’ house (there are some advantages to living at home, after all). And so it happened that on Friday evening all three of us were sitting on my bed and wondering what we should do, when my eyes wandered over to the Clover pom-pom maker which I had bought a few months ago (at a much lower price than the one currently listed on Amazon, though!). In the spur of the moment, I suggested we make some pom-poms, thinking this might amuse us for a half hour or so.

I couldn’t have been more wrong. My friends, we kept on making pom-poms until it was time to go to sleep. And the next morning, when we decided to have a picnic in the back yard, the activity of choice was again – pom-pom making! The looks of intense concentration on these two kids’ faces hung around all day, and they were constantly trying to get nicer and more colourful pom-poms.

I am still amazed, most of all at my own failure to put two and two together before: kids love doing things with their hands and creating stuff. I do too. Why haven’t we been creating things all this time? Sure, my nephew asks for coloured pens and paper to draw on the moment he walks into my room, but it had never occured to me before that he would also enjoy the fibery creativity that I indulge in so regularly. Lesson learned. Between now and their next visit I’m going to be scouring the Internet for other creative activities for kids.

In the meantime, I’ll try to make some sort of a useful (well, maybe not useful, but pretty) object from all the pom-poms we made, to keep it as a reminder of how much fun we can have with the simplest of tools. I’ll let you know how it goes. One thing’s for sure, though: I won’t be short of materials.

And if you’re wondering where all these different colours and fibers came from – yes, I did let them loose in my stash. That alone should tell you how much I love them… ;)

There has been knitting. Loads of it. But the light is terrible (and short – it gets dark before 5pm!). In addition, today our warm water decided to stop working. And I’m definitely not posing for photos with unwashed hair. Sorry. Let’s hope for better luck tomorrow. I hope we get it, because I have three completely finished, weaved-in, blocked, buttons-sewn-on things to show you. :)

Oh, yes, and some pom-poms are involved too… ;) I’ve been trying out my new pom-pom makers, which arrived from Sew and So yesterday.