Back in August last year, a very very dear friend of mine and her husband invited me to dinner at their house and then proceeded to announce they were expecting their first baby (doesn’t it seem like all my blog posts lately start like this?). Of course, I was thrilled for them, so thrilled in fact that I sprung into action immediately the next day (once I had recovered from the hangover from all the wine with which I had toasted their news). As it was going to be a peak-of-winter baby, I had no doubt as to what I wanted to make first. 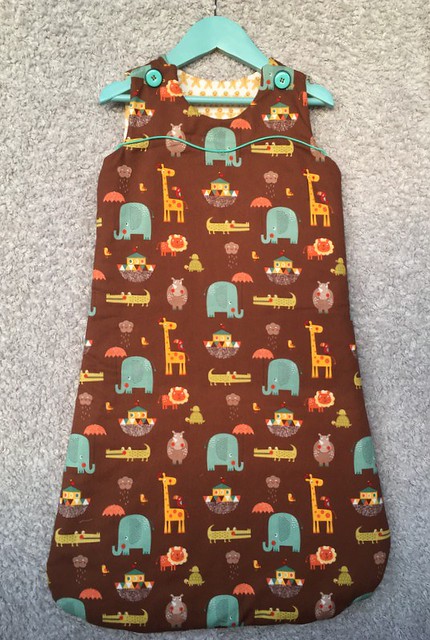 The Lua Sleep Sack had been a raving success the first time I made it, and to be honest it’s so much fun that I want make it for any baby I know! (Only some of them insist on being born at times of the year where four layers of fabric and two of wool may not be totally appropriate.) In fact, the moment I finished this one, I went straight to the shop and bought a stockpile of organic wool batting for when the next opportunity to make this pattern arises.

Even though the pattern is fairly simple (only three different pattern pieces to cut out), it provided plenty of opportunity to work on honing some sewing skills, and I’m quite proud of several of the things I achieved here.

Firstly, the smooth curve of the piping (which came out much better than the first time around), and more importantly, the fabric pattern matching I managed to achieve around the piping. I don’t want to brag, but I mean, just LOOK at that elephant and that hippo! I dare say even the formidable Patrick Grant of the Great British Sewing Bee would not object to its execution. It probably took me as much time as all the other steps of the pattern together, but by gosh it was worth it. 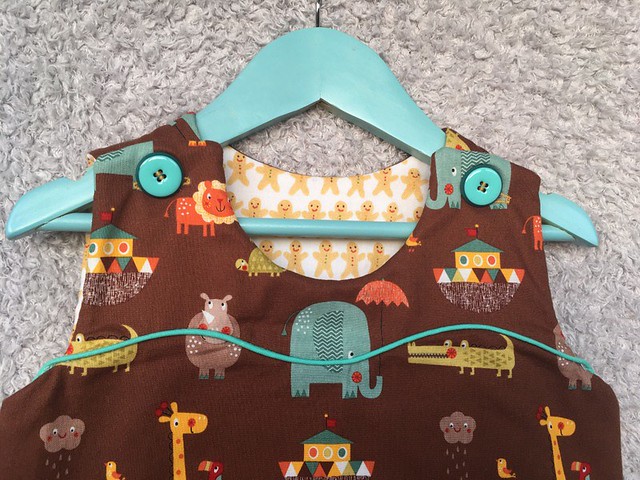 Secondly, I managed decent buttonholes. Not the most advanced of skills, but seeing that we’re talking about 6 heavy layers needing to be fed into and pulled by the sewing machine here, and the high risk of things getting messy beyond repair at the very last step, it is one of the most stressful steps of this pattern. This time I even tried out sewing on buttons by machine, and it was so easy and quick! 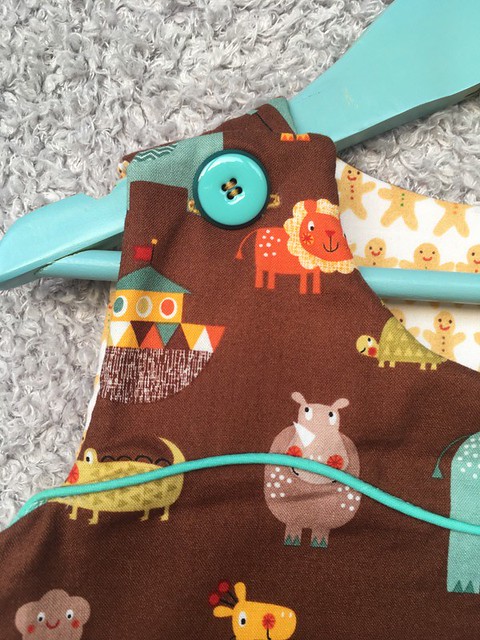 Thirdly, I’m so pleased with my colour matching of the different elements. Early on I chose the elephant as the element I’d try to match to, and it was so pleasing to find the perfectly coloured piping, buttons and even a hanger (!) to bring the whole ensemble together. Not to mention the cardigan in matching yarn and a store-bought pair of tiny little coordinating pants (more on that to come in the next post). 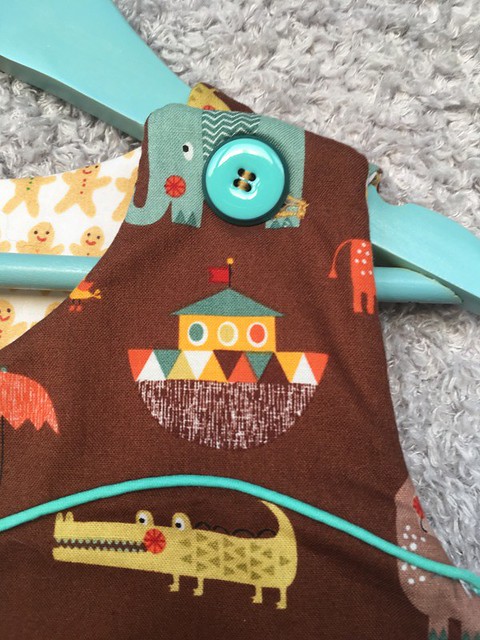 And finally, though you cannot see it on the finished item at all, I learned how to piece together small scraps of wool batting to use them up fully rather than throwing them away. A little googling led me to some helpful tutorials, and I was wonderfully surprised by how easy it was to do. It meant that I was able to make this sleep sack with the batting leftovers from the first one, meaning I can make two sacks out of one package of batting. And from the outside you cannot see any difference whatsoever. Functional, economical and avoiding waste. Awesome.

Apart from the organic wool batting, I used organic Cloud 9 cotton for the two fabrics, and I was particularly happy to finally be able to use the gingerbread men print I’ve had my eye on since 2015! Aren’t they adorable? 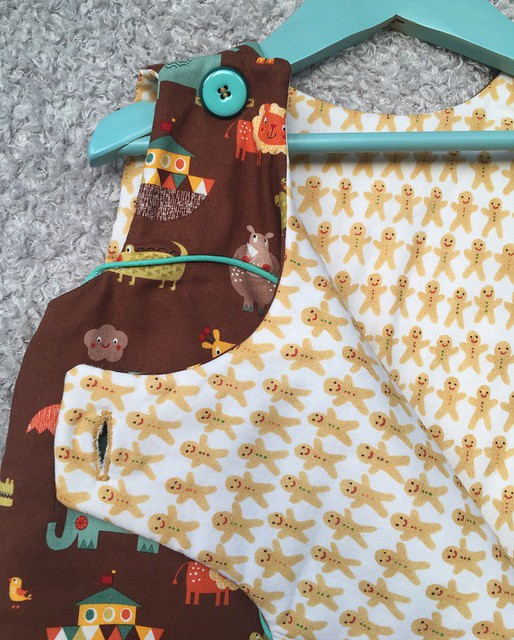 All in all, an extremely pleasing project which brought me as much joy to make as it did to the now family-of-three when I finally delivered it to them last weekend. And one thing’s for certain – it won’t be my last Lua sleep sack!

What better way to end 2015 than with a wonderful new beginning – my very best friend has just had her second little boy, and right on time for me to be home in Croatia and say hello to him before I head back to Belgium. We are all over the moon.

Of course, as with her first one, I couldn’t let this pass me by without making something extra special for the little one, to keep him snuggled up in warmth and love. But this time around, a set of circumstances resulted in a situation where a knitted blanket was simply not possible… Luckily, I’ve acquired some new skills in the meantime, and so I still had a trick up my sleeve: sewing! 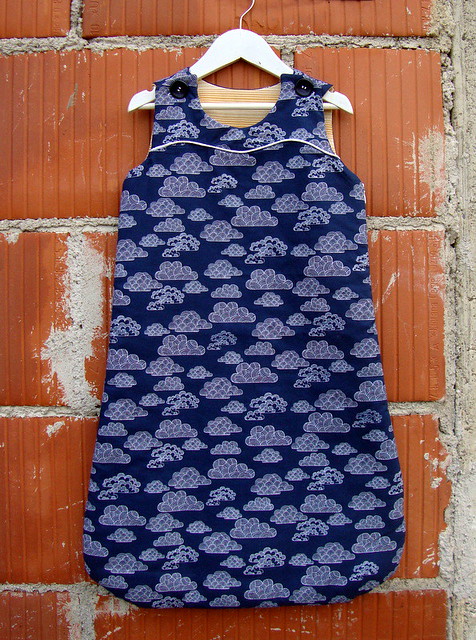 I came across the Lua Sleep Sack pattern by total chance, just as I was mulling over what on earth I could make for the new baby fast enough to be ready for him when he comes out. It was mentioned on a blog I read ocasionally, and which normally does not feature baby patterns, it was available for purchase and printing online, and later it even turned out that the pattern author was Belgian! Some things are just meant to be. I wasted no time in buying and printing it, and then I plunged right in. 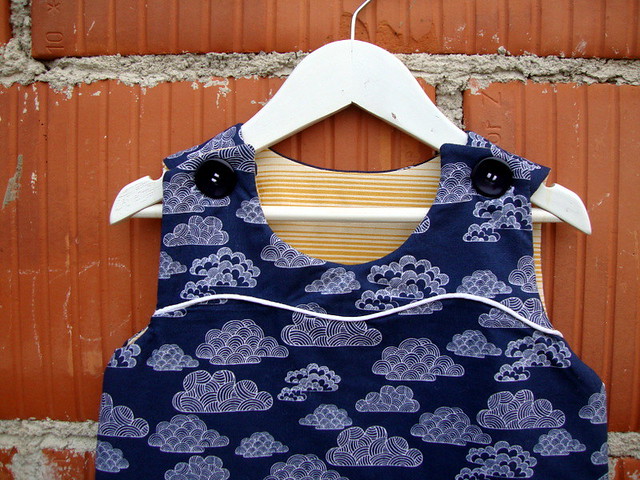 I informed two of my friends who are most experienced with sewing that I would need their help when things got tricky, and they were on stand-by with their phones. It turns out that was not necessary at all! This pattern is so well written and presented (StraightGrain used 40(!) testers) that you simply cannot go wrong. The instructions are so clever that they even warn you to double-check whether you have lined everything up correctly at those exact spots where you might be tempted to rush ahead and regret it later. I would highly recommend it to anyone, regardless of their skill level. The pattern pieces themselves are fairly simple, but sewing 6 layers of fabric together at certain points can be quite tricky (think main fabric+batting+lining x 2 for front and back of the sack). However, the author guides you through all the tricky spots, and every question that may pop up in your mind is answered. I had the whole thing printed, cut, and sewn together in one weekend. And I am really, really slow at sewing. 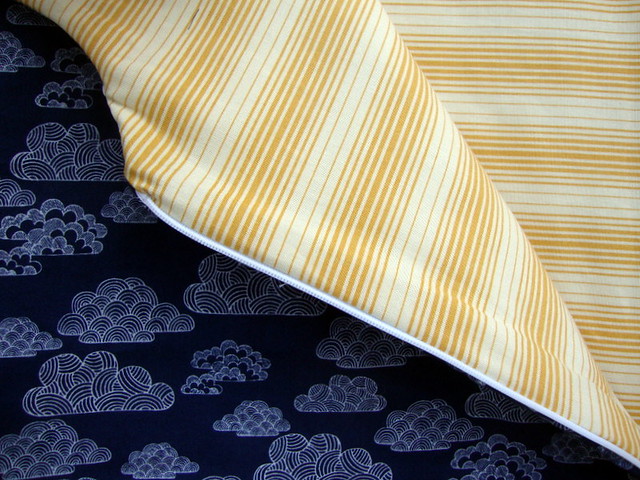 As for the materials, I found a lovely fabric in a local craft shop, and now that I did some internet research on it, I’m thrilled to see it actually turns out to be organic cotton! It’s a Cloud9 design, called Nimbus Navy. I looooove the design and I’ll definitely be looking into this company more for my fabrics. I also used a 100% wool batting, because it was recommended by the pattern and by the shop assistant, and also, well, because I’m a knitter and I don’t actually need anyone to convince me about the merits of wool over synthetics. 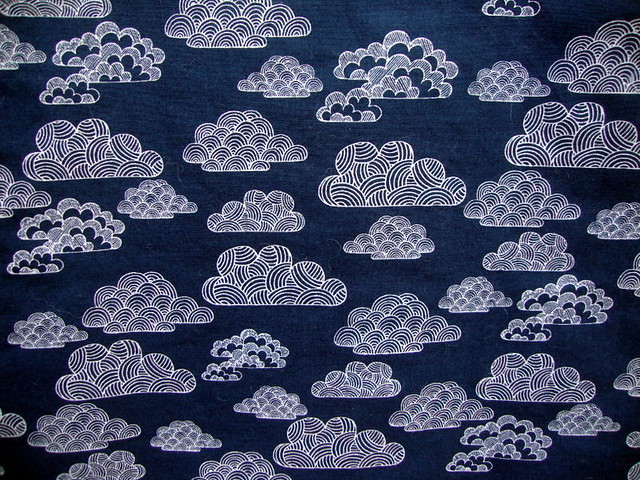 In conclusion, I am super happy with how this turned out and I hope it will serve little Toni in good stead. And in addition, it really whetted my appetite for sewing too – I want to make dozens of these now! Bring on the babies, 2016!

Another one of the aims I set myself for 2013 was: sew something. Very ambitious, I know. But with one major craft obsession (knitting) and another craft crush (crochet) already on the plate, I wanted to go easy on myself. Goals like “learn to sew” seemed both too vague and too huge to accomplish. But “sew something, at least one thing” was much more achievable and motivating.

Luckily, I have a few friends who know about the craft, and have the tools for it as well. Last Sunday a few of us impulsively decided to have a crafting afternoon, and suddenly I found myself accomplishing my goal without any planning or preparation! Lookie!

I. Sewed. A. Something. It is very simple, and not perfect, but I did it, I did it, and by gosh the edges are kinda straight and nothing is falling off . It is even functional!

That’s one project bag that will be shown off with immense pride come my next Stitch’n’Bitch meeting!

So, first impressions? It was fun! I improvised the pattern, just by imagining how things would have to work, and doing a little sketching. It is definitely an exercise in three-dimensional visualising and logical sequencing. I’m not terribly good at the former, so it’s a nice challenge, and I dare say that I have a slight suspicion it will make me a better knitter as well.

In terms of the process, I found myself laughing at some point, as I thought to myself: “Well, I’m not patient enough for this!” All that measuring, drawing, cutting, sketching, trying out on paper, ironing, pinning… The actual sewing is like 10% of the time! At the same time, I remembered that the sentence I hear so often from people, after I tell them I knit, is: “Oh, I wouldn’t have the patience for that…” A knitter’s perspective is interesting… :)

And what’s next? Well, with this goal accomplished so early on, I think I may as well plan to sew Another Something. I really like this. Do you have any other recommendations for patterns/tutorials? I’d love to hear them!